DRUG addiction is most likely the paramount localised experience that was never summoned to the apex of active attention through meaningful public discourse by the authorities across governments. Drug addiction is now proliferated by substances through diverse mediums and has edged into a normalcy avoiding records of impact on spontaneous crime and of its captured souls or victims that parade before us in our streets. Human beings that some families are still struggling with, others with less social resources to sustain an addict, and the family still survive have had to let loose kinfolk who had become too dangerous and imposing to sensibly manage, to join Guyana’s numerous walking dead, across ethnic and social strata.
I have had experience enough to declare that I do know some things about this. I do understand why some went into the embrace of the narcotics business. Most of our history, the working class has never been salary-wise rewarded in keeping with the demands of the day. To see your father or mother work all their lives and suffer in the end because there was no money for medical attention with dignity, or end up at the “poor house” because the yard where the observing tortured youth and siblings were born, in a rented house that was abruptly after years sold, and the new owner wanted everyone out, and the disturbance of that resonated a desperation of ‘I’ against the world.
I can remember a specific unscrupulous homeowner of a dwelling in Northern Street who wanted a legitimate tenant out by any foul means, had a grenade thrown into his house where the young couple lived, she died and he lost an arm. In the real world when some are unable to change things, humans prefer to black-out or reject acknowledging that things happen to people who don’t deserve it. Thus, some easily decided that if drugs proved a way out, they would take that chance, then recognised too late that, as my Rasta friend said, “Brethren, cocaine is a jumbie. ” Its impact on our society proves it is. 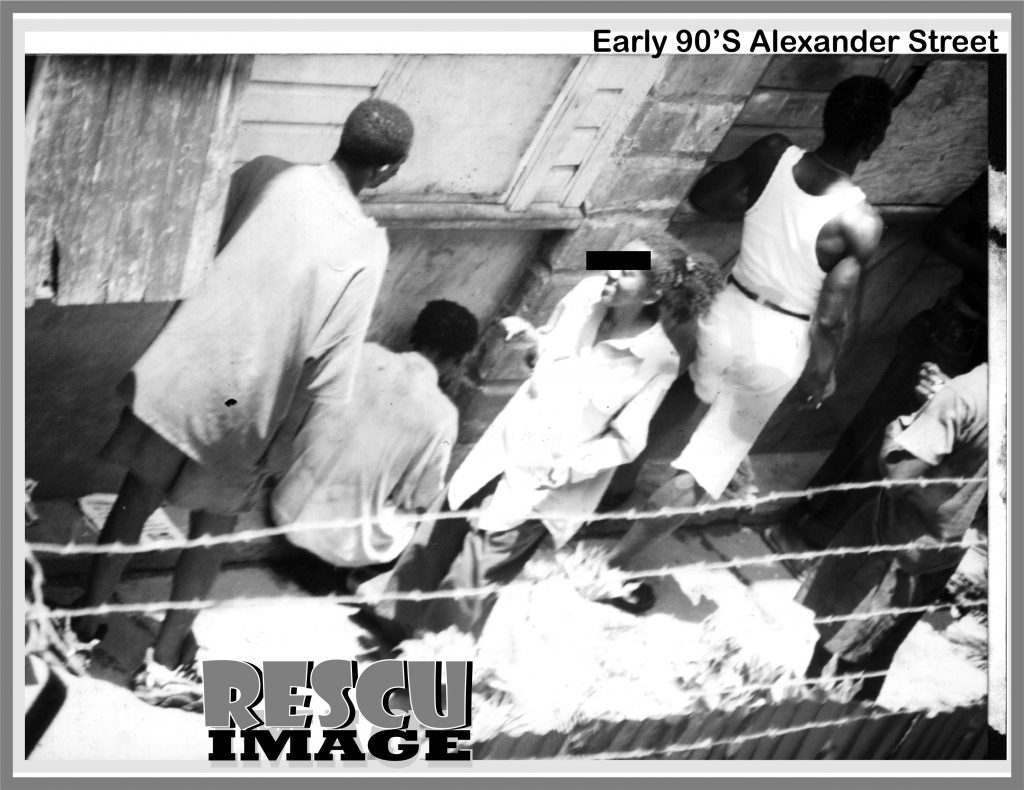 The addict’s worst enemy is the time that he or she has lost, and the burden of accepting it as his or hers. I have known addicts who have been hooked for over a decade, and it is obvious that a personality flair they once had was gone, the less ‘will’ to defy, the longer the mental imprisonment lasts, the world changes, and with it the rules. I know a once progressive trader, who was invited to sample cocaine. This was the story she told me: She lost everything, the homelessness of addiction took her into the most unusual and bizarre places to sleep, help came late. By then, some 10 to 12 years later ‘Suitcase Traders’ were history. Her very means for survival had become obsolete. From my experience with an addict closer to home, the substance and others they are drawn to, like the variety of pills and Frankenstein marijuana that is fitted onto the demon’s menu diminishes the creative cognizance to analyse the options of the social no man’s land that recovery awakes them to. Thus, there is the habit to seek normalcy by picking up exactly where they left off, riveted in the good memories, real or invented leading up to addiction, with this person retracing the same habits has inevitably led to relapse more than once, twice and thrice. The worst response by the normal but easily susceptive egotist is the design of guilt-transference memories. Well no one wants to admit that based on the evidence of drug abuse, “I WAS AN IDIOT TO USE DRUGS” so, they come up with a story about bad parents, evil siblings, horrible relations, to win the sympathy of hopeful suckers eager to become intoxicated on a whiner’s drama on the street or social media, to hide the responsibility of self-redemption, for there is no other redemption, for faith first, must be followed by works, this awareness is not easily embraced by the unrestrained ego. The only addict’s pledge towards rehabilitation regardless is “I have screwed up, and this is my fight, first.”

No way must it be considered that persons involved in the narcotics or any area of crime is exclusively a victim of immediate unfortunate social circumstances. Contrary to that, the most effective and callous advocates come from those who have attained social comfort but are rooted in the almighty means of self-comfort, void of cultural roots in the consciousness of any collective humanity. They are well-positioned and need to remain there at any cost. The police force today has acquired the response culture in respect to reports on addictive behaviour, and that is progressive, but the holistic handling needs more, though drug abuse leads to poor mental health, it should be treated separately, and not channelled on the same Berbice route. But the development of such expertise has long not been given the importance needed, and such skills require time to bring into functional capacity. In the meantime, those of us who pay attention can only reflect on the following captions over the years; “ New father killed by drug addict “; “Man 81, wife 49, butchered by drug-crazed youths”; “Suspect admits beheading woman on seawall”; “Berbice man killed by Junkie over $2,000. Pension”; “Woman stabbed by drug addict husband succumbs”; “Drug addict kills 75-yr-old mom”; “Man killed while seeking wife in drug yard”; “Drug addict begs for rehab help, admits…”; “A mother’s pain: son lost to drugs, then to injustice”; “Junkie paid with snow cone to kill woman” and hundreds of other newspaper headings over the years that allude to our first modern pandemic.