THE Society Against Sexual Orientation Discrimination (SASOD) has launched a social media campaign to put a halt to cybercrimes against the lesbian, gay, bisexual, transgender, and queer (LGBTQ) community in Guyana.
According to Managing Director, Joel Simpson, the non-governmental organisation, which usually documents cybercrimes against LGBTQ persons in Guyana, has noticed an increase in cybercrimes since the country entered a partial lockdown and more persons were forced to stay home.

Simpson, during an interview with the Guyana Chronicle, noted that the discovery led the organisation to launch an online campaign against cybercrime and cyberbullying.
“We noticed that because of the partial lockdown, and the stay-at-home guidelines, that there was an increase in cyberbullying and also cybercrimes. It seemed logical because now persons weren’t interacting in person as much and so they were taking their grievances and their prejudices out on other people online,” Simpson said.
He told the Guyana Chronicle that while the organisation has been providing services for victims of cybercrimes and cyberbullying, they needed to adapt a strategy to target the perpetrators to spearhead a prevention method. “We recognised that while we are providing services for people who are victims, we really wanted to prevent these cybercrimes and cyberbullying from happening in the first place.” 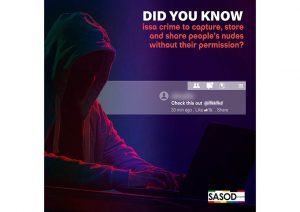 A huge part of prevention, Simpson said, is education since according to the organisation’s research and data collection, many Guyanese are not aware of the serious consequences that follow when one commits a cybercrime, especially when it relates to the sharing of nude photographs, without consent, acts of humiliation, vulgar comments about people’s health status and defamation of character.
“A lot of people, especially young people, don’t know that some of these acts that they are committing online are actual crimes and that they can go to jail for a minimum of three years and be fined for millions of dollars for committing these crimes,” he stated.
Simpson added that given the ages of the perpetrators, the campaign is based on social media platforms which see posters and other content being posted with the particulars of the Cybercrime Act 2018.

“The average person won’t sit down and read a piece of legislation to learn something so you have to kind of give them it in a bite-size digestible social media like post… we [decided] to do an online social media campaign to educate people about what are the particular offences in the Cybercrime Act 2018 and what are the very, very serious penalties and hefty fines,” he told this newspaper.
Additionally, Simpson disclosed that the organisation has been working with the Guyana Police Force’s Cybercrimes United to keep track of cases that would have been reported during the pandemic.

“We work very closely with the cybercrimes unit at CID both here in Georgetown and at New Amsterdam in Berbice [and] because of those relationships, we are able to monitor cases [and] let them know that we are representing people and follow up on people’s behalf.”
With respect to the COVID-19 guidelines, SASOD has been offering their services online, providing members of the LGBTQ Community in Guyana with psychosocial counselling via the Zoom application and WhatsApp.

“When the COVID-19 pandemic had started we had generally transformed our services online, especially our legal services, human rights documentation and our counselling services so we were giving and all of that primarily online,” he said.

Simpson added that the organisation has been urging persons to reach out to SASOD not only to report crimes, but also for counselling as well as encourage others who have been a victim of a cybercrime of cyberbullying.
“Apart of the campaign as well, we have been telling persons who would have recently experienced any form of cyberbullying or cybercrime to reach out to us so we could provide support and we had a few people coming forward,” he said.