HERE is another in my series of interracial Guyanese married couples. This one with the focus on what is described as “A Rainbow Family.” No doubt you know of families which could be described as such, in which members are individually and collectively of various racial heritages. Most members of such families usually speak proudly of their varying ethnic composition; especially those who can claim that they have the blood of all the six races of Guyana flowing through their veins. You probably know such Guyanese.

Retired Guyanese journalist, author and diplomat Burnette Alexander Halder, better known as Peter Halder, is the proud patriarch of a ‘Rainbow Family’. The son of an East Indian immigrant, Peter worked his way from a journalist at a now-defunct newspaper, through being Head of the Publications Division at the Guyana Information Service, and through the Guyana Diplomatic Service. He served as Guyana’s senior diplomat, both in the United States and Canada and later as a consultant to the Fiji Government Ministry of Foreign Affairs.

No doubt you have had many experiences of observing interracial couples living happily together. I have been encouraged to write some more about interracial couples, and about the joy of being free of racial attitudes and rhetoric which create so much misery among those who hate others based on the difference of race. 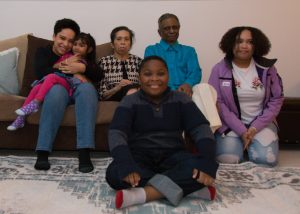 No one is born a racist. Racism is usually taught from childhood. There is that song in the Rogers and Hammerstein Musical “South Pacific”, which places a magnifying glass over that human frailty. The song is entitled “You’ve got to be carefully taught” in which it is emphatically stated that racism is taught by the time “you are six, or seven or eight.” One of the best cartoons on the teaching and learning of racism which I have seen is that of a mother bottle-feeding her baby with the word “racism” written on the bottle of milk.

Fortunately, there is a growing number of people who understand the nonsense and evil of racism and stay away from it. They are the people who clearly understand that the Creator is a creator of diversity. Some people have grown up in loving “Rainbow Families” one of which I am so happy to feature in this article, even as Guyana is once again embroiled in some very serious racial issues, spawned by partisan politics. These issues are even played out in sections of the Guyana diaspora. More citizens seem to be moving away from what we promise in our National Pledge- “To love my fellow citizens” – and have been engaging in some serious racist rhetoric which is non-productive at best and rather dangerous at worst. But all is not lost. Many Guyanese of varying racial groups are still seen together enjoying each other’s company. It was the American Civil Rights leader Rev. Dr. Martin Luther King, jr. who made the statement, “Hate is too heavy a burden to bear.”

Retired Guyanese diplomat and novelist Peter Halder is the son of an East Indian Immigrant and is now the Patriarch of what can be described as a great Guyanese/American Rainbow Family. Peter grew up in Albouystown, Georgetown and went on to step in many corridors of power in over 60 countries around the world. For nearly half a century, Peter was fortunate to have by his side his wife Mirri who is of African, European and Indigenous heritage. They met at the Ministry of Information back in the early 1970s. She was the secretary of the Minister of Information and national poet Martin Carter. At that time, Peter headed the Publications Division of the Ministry. The couple were married on June 26, 1971, at St. Andrew’s Kirk in Georgetown, and worshipped there for some years. The loving couple celebrated their 49th wedding anniversary on June 26. They are the proud parents of four and grandparents of four as well, which make up a happy Rainbow Family.

During his active years at the Ministry of Information, Peter travelled extensively within Guyana, and during those exposures, garnered much insight into Guyana beyond Georgetown. He has many publications to his credit including two novels; “The Cat of Muritaro” and “Resurrection”. The story of the ongoing journey of the life of Peter Halder and his wife Mirri as an interracial married couple is one like a rainbow created as the waters of the mighty Kaieteur Falls in flowing over the lip and falling 741 feet to the gorge below, creating a beautiful rainbow like the bright sunshine of a happy interracial marriage.