…despite alarming increase in COVID-19 cases in the community
…Min Allicock chides organisers, protesters for exercise

By Alva Solomon
A GROUP of residents at Santa Rosa, Moruca, on Tuesday, converged at the Kumaka waterfront area to protest lockdown measures in place at the villages there.
At the same time, some cast doubt that the virus exists, a position which has left many baffled. In what many deem a bizarre move, the residents, numbering no more than 25, gathered in front of the regional administration building to stage the protest.

Despite strict COVID-19 measures being enforced in the area, reports are that the group was given permission by a senior police official, who is stationed at Mabaruma, to gather in the area. This was confirmed by police officers from the Acquero Police Station who noted that they were following “orders of the commander.”
Minister of Indigenous Peoples Affairs, Sydney Allicock, noted, on Tuesday, that he was “very disheartened to learn of the reaction of some persons towards a most caring and necessary decision of the Village Council, led by Toshao Whanita Phillips, to lockdown the Village in the fight against COVID-19.”

He urged residents to support the village council at Santa Rosa, “the very people you entrusted with the power to manage your village affairs, the very people who are acting in the best interest of you and your families.”

We are, now more than ever, our brother’s keeper, Allicock said adding that “we owe our neighbours a duty to protect them by doing all that is necessary to try to flatten the curve.”

Allicock said that he firmly believes that the decision to lock down the village was the best option at this time, since Moruca is now the epicentre of the virus. “Therefore we must understand how quickly and dangerously the situation can be, if we fail to act now.”

A senior Opposition People’s Progressive Party/ Civic official told the Guyana Chronicle, from Moruca, that the intent of the protest was to get the authorities to be made aware of how the lockdown measures were affecting persons within the villages at Moruca. 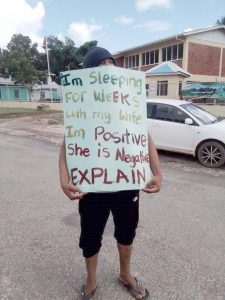 She said that a restriction was placed on persons in accessing their farms, noting that it was affecting their households. She pointed out that no one sought permission for the protest, adding that the police came and dispersed the crowd  sometime after the exercise started around 10:30hrs on Tuesday morning.
Over the past several days, a relative of the late Vincent Torres, a former teacher, who died at Moruca from complications attributed to the disease several weeks ago, has been posting messages regarding the planned protest.

He gained support in his posts from several residents, many of whom continue to deny the existence of the pandemic. The man’s moves have been condemned by several prominent residents of the area as well as executives of the Amerindian Peoples’ Association (APA).

Several healthcare workers on the ground have criticised the protest exercise. “This is a hard slap to the face of the SRVC {Santa Rosa Village Council} and all the frontline workers putting their lives and love ones at risk,” a nurse who works at the Kumaka District Hospital noted.

Moruca resident Graham Atkinson was critical of the police. “The Guyana Police Force High Command gave permission for an utterly baseless protest action in Santa Rosa, Moruca today,” he said. He called on the Commissioner of Police to explain the reason behind the granting of permission.

The protest is seen as a slap in the face by many residents and non-governmental organisations (NGOs) whch have been working around the clock to bring relief to residents affected by the Coronavirus.

Thus far, more than 75 cases of the virus have been recorded at Santa Rosa, Moruca, and one at the neighbouring village of Kwebanna. The Ministry of Public Health is expected to carry out mass testing in the area as well as other Hinterland regions.