EVEN as the Guyana Elections Commission (GECOM) awaits legal guidance from the High Court, the A Partnership for National + Alliance for Change (APNU+AFC) remains confident that it has won the March 2,2020 General and Regional Elections.

Though GECOM has been temporarily barred from declaring the official results for the Elections, the total results declared by Returning Officers (ROs) for the 10 Electoral Districts show that the ‘Coalition’ government is in the lead by over 7,000 votes. While the People’s Progressive Party/Civic (PPP/C) won six Regions, and the APNU+AFC, four, the Coalition’s ability to maintain its stronghold in the country’s largest voting block (Region 4) has placed it in the lead, GECOM’s records show.

“We believe that we have won these elections,” APNU+AFC Campaign Co-Manager Joseph Harmon told reporters on Thursday while rubbishing claims of electoral fraud.
“As far as I am aware, there is not a finger that has been lifted to say that the APNU+AFC was involved in any fraud,” he told reporters during a press conference at the Coalition’s campaign office in Georgetown.

While the March 2, 2020 General and Regional Elections were peacefully conducted in accordance with the Constitution and the Electoral Laws of the Guyana, the process was severely disrupted during the tabulation of the votes cast in Region Four (Demerara-Mahaica). A number of opposing parties, led by the PPP/C, had objected to the methodology employed by the Returning Officer, Clairmont Mingo, their objections on March 5 were later turned into litigation. On March 11, the High Court invalidated the declaration made by Mingo on March 5, on the grounds that a percentage of the Statements of Polls (SOPs) were not tabulated in the presence of persons entitled to be there. In his Affidavit in Defence, Mingo contended that the PPP/C had frustrated the process. “The environment at the GECOM office, where the tabulation was being conducted for Region 4, was at times chaotic because of the large number of persons present, and the efforts by PPP/C representatives and others to disrupt the declaration of results,” the Carter Center observed in one of its report. A second section was made on March 13.
However, since March 5, 2020, the Guyana Elections Commission; its Chairman, Justice (Ret’d) Claudette Singh; its Chief Elections Officer Keith Lowenfield; and the Region 4 Returning Officer Clairmont Mingo have been faced with one legal action after another. The last two legal proceedings filed in the High Court are intended to: Firstly, set aside the second declaration of votes made by the Region 4 Returning Officer, in the case of the application brought by Bharrat Jagdeo and Reeaz Hollader; and secondly, in the case of the Ulita Moore application, set aside GECOM’s decision to facilitate a national recount, and uphold the declarations of all 10 Returning Officers. The High Court has not ruled on these two cases.

APNU+AFC NEVER WAIVERED
Harmon said that throughout the electoral process, the APNU+AFC has respected the independence of the Elections Commission in fulfilling its mandate to conduct free, fair and credible elections in Guyana, as outlined in the Constitution.
“Throughout the electoral process,” Harmon said, “the Government of Guyana did not seek, in any way, to influence, interfere or instruct the Elections Commission in its work. Throughout the elections campaign and after the 2nd March, 2020, APNU+AFC made it very clear that it respects the independence of GECOM, and that no other entity had any statutory right in the exercise of that function.”
He iterated that throughout the Campaign, President David Granger repeatedly indicated that the APNU+AFC respects the Constitution and the Supreme Law, the Judiciary and the independence of GECOM.

While GECOM awaits a decision from the High Court to determine whether it can facilitate a national recount of all the votes cast at the March 2 Elections amid concerns by the Opposition that the tabulation of the votes was not as transparent as it ought to have been, the APNU+AFC Campaign Co-Manager pointed to the fact that Chief Elections Officer (CEO) Keith Lowenfield has already compiled and submitted his Report to the Chair of GECOM. That report was submitted shortly after the Region 4 Returning Officer made his declaration on March 13.

STANDS GUIDED
“The APNU+AFC stands guided by the fact that the Chief Elections Officer submitted a declaration to the Elections Commission, requiring that the Commission deliberate on it, and give their final declaration. That declaration by the Chief Elections Officer was made on the 14th March,” he said.
However, Harmon said the Coalition is cognisant that a number of legal proceedings were filed on March 13 and thereafter, restraining the Elections Commission from issuing a declaration until a final determination is made by the High Court. Justice Singh, in a recent statement, iterated that the GECOM must await a final determination by the Court, before it determines its next step.
In light of that statement, Harmon expressed the hope that GECOM would be able to conclude the electoral process as soon as possible. “In this regard, we urge GECOM to have those matters concluded earliest, so that the final results can be made, leading to the swearing in of the president,” he urged.

Asked whether the Coalition will support a national recount, Harmon iterated that the Coalition will continue to respect the decision of the Court and the Elections Commission. “We believe in the Law; once the Law provides for it… If it is by a declaration of the Chairman of GECOM, or it has to go to court by way of a petition, whatever is the outcome of it, we will support it. And so we want to make that very clear,” he posited.
Today, the High Court will hear arguments on whether or not it has jurisdiction to adjudicate over the case brought by Moore. Its decision in this case will determine whether or not it will proceed to hear the other applications. 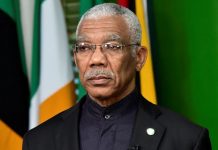 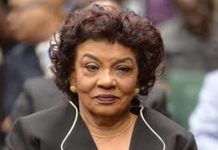 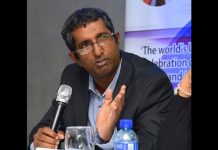