MAGISTRATE Ann McLennan, on Thursday December 12, 2019, remanded a 47-year-old conductor to prison on an attempted murder charge.
Rawle Thomas of North Ruimveldt appeared at the Georgetown Magistrates’ Court and was not required to plead to the charge.

It is alleged that, on December 8, 2019, at North Ruimveldt, Georgetown, with intent to commit murder, he unlawfully and maliciously wounded Akela Roger.
Police Prosecutor Neville Jeffers objected to bail being granted to Thomas and told the court that, on the day in question, Thomas went home about 22:30 hours and started to accuse his wife of having another man.

Jeffers stated that, they had an argument and Thomas took a pot of boiling water and threw it on Roger and choked her. Thomas then stabbed her with a knife. Roger ran outside and neighbours went to her rescue. She was taken to the Georgetown Public Hospital Corporation, an investigation was launched and Thomas was arrested and later charged.
Magistrate McLennan remanded Thomas to prison until January 3, 2020. 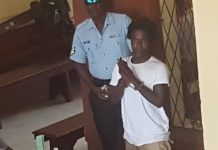 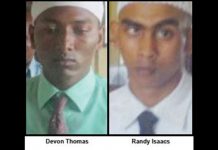