The seven-game day of football, which was deemed a success by the organisers, saw four female teams battle, including the Santos Ladies who registered a 2-0 win against a young Eastveldt female side.

Later in the day, Santos FC won on penalties, 7-6, after they had finished regulation 0-0 against GDF FC in the Elite Teams battle.

Meanwhile, in an Over-50 battle, Santos FC drew 1-1 with Pele FC.  Jolyan Lewis scored for Santos and Wayne Poulis for Pele.

In the other female battle, Fruta Ladies edged out Lady Panthers 2-1. Thandi Smith and Abiosa Heywood scored for the winners, while Pasty Edwards netted for the Panthers.

There were two other games carded, including one between GT Masters and Ballers FC Veterans. In that game, Omali Nassy and Calvin Pitt scored a goal each for GT Masters to secure a 2-0 win.

In another clash, West Dem Masters emerged victorious over Kanaimas via a 6-5 penalty finish. Both teams were scoreless at the end of regulation time.

The event was sponsored by the Outdoor Store and Pet Shop, West Indian Sports Complex and Trophy Stall. It was supported by GFF, ABSAA Inc. and many individuals. 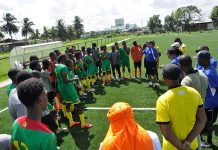 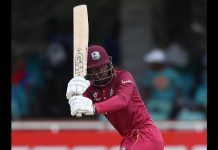 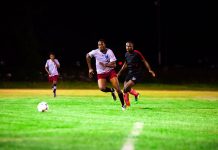