ONE week after being arrested in Suriname, wanted pirates, Ricardo Fraser called “Shines” and Anonth Boodrage called “Andy”, have been placed before the court and charged with the capital offence on Friday.

The men, who were handed over to Guyanese authorises on Wednesday, appeared before Magistrate Renita Singh at the Albion Magistrate’s Court and were charged in accordance with the Hijacking and Piracy Act of Guyana, Section 7, Chapter 10:08.

The facts of the case as read in court stated that between October 5 and 13, the men murdered Vishnu Seeram called “Kevin”, 20, of Lot 76 Miss Phoebe; Marvin Tamessar, 20, called “Buddy” and Lamar Otto Petrie, 20, both of Miss Phoebe, Port Mourant and Kawal Kissoon called “Ajay” of 223 Letter Kenny Village, during the course of a piracy attack on the Corentyne River.

Fraser, 22, of Epson and Boodrage, 21, of Belvedere, both villages on the Corentyne, were unrepresented and not required to plead to the indictable charge. They were remanded until November 14 where they will appear at the Whim Magistrate’s Court.

According to police sources, the duo will be appear with the trio of Suresh Sundat called “Chu Chu Bai”, 22; Narine Dhanrajh, 30, both of Belvedere Village and Lennox Arleigh Grimmond called “Breeze”, 38, of Cromarty Village, East Berbice, Corentyne, where they will be jointly charged.

Epson and Boodrage were found in a boat that was at docked in an area called “Leferno” in Suriname, following a wanted bulletin issued by the Guyana Police Force. They were subsequently charged with entering Suriname and deported to Guyana on Wednesday, October 5, 2019.

The quintet reportedly tried to loot the catch of the four fishermen who were aboard the SARA One vessel in Suriname Waters, but after being recognised, they brutally beat, bound, chopped and threw the four men overboard and made off with their catch and engine.

The court appearance of the two men marks yet another successful effort by the Guyana Police Force to bring the perpetrators of piracy to justice. Following a major act of piracy in 2018, the Minister of Public Security, Khemraj Ramjattan, vowed to put measures in place to help curb crimes on the high seas. He initiated collaboration with the local police and Surinamese authorities where intelligence and resources are shared across the two  countries to bring those responsible before the courts. 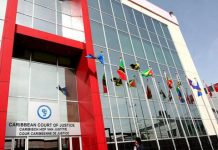