THE National Assembly on Friday approved the $267 billion state budget after detailed scrutiny over a five-day period. However, on the first day when financial allocations for the Ministry of the Presidency came up, the opposition tried to derail the sitting by resorting to filibustering and flagrant disobedience of the Speaker’s orders. The resultant noisy disruption led to the suspension of an opposition MP for gross disorderly conduct.

That contempt for the legislature and disrespect for lawful processes constitute one aspect of the politics of dissent and disorder that is embraced by the opposition. Other features include periodic withdrawal from the chamber and peddling lies and misinformation.

CONGENITAL LIAR
The current web of lies has led me to recall an encounter that I had with Dr. Cheddi Jagan, late President of Guyana, after a member of a previous Cabinet had lied about the procurement of a generator for Lethem. We had planned a trip to the Rupununi and the President wanted the broken generator in Lethem to be replaced before the visit.

I had contacted the minister who assured that, that would be done but subsequently he lied about his undertaking, which caused the President to rhetorically ask me: “What are we going to do with this congenital liar?”

Today, when I recount the litany of lies being peddled by some elements, I remember the sadness in the voice of the good leader as I shared his torment back in 1996, mere months before his death.

FAKE NEWS
On Friday, as we wrapped up consideration of the estimates, Minister Harmon exposed the latest of these lies that the Ministry of the Presidency had bought on credit $100 million worth of bulletproof vehicles. The lie was planted by suspended MP, Juan Edghill, who is being investigated for previously misleading the House by allegedly making false statements. The minister denied the malicious claim which was made by the self-professed Bishop and “man of the cloth.”

During the general debate on the 2018 national budget, several ministers responded to an outpouring of “fake news”, which the opposition benches had tried to pass off as facts. A buzz, “fake news”, went up every time an opposition MP made exaggerated claims.
Then the sublime gave way to the outrageous, when the leader of the opposition claimed that a specific sum of $300 million has been allocated for the prime minister’s secretariat. My technical staff combed every head of the estimates and could not find this phantom $300-million line item.

I was waiting to bludgeon the wily, young pensioner for that Big Lie during the review of the estimates for my office. The opposition leader knew that I would call on him to withdraw his false statement, and that I would demand an apology to the House. But his zealots forced a suspension of the sitting before my agency came up for review.

Earlier, with a dry, straight face, he had claimed that the prime minister’s annual salary is $100 million. He magnified the intended mischief, saying that the PM’s salary could provide jobs for 1,000 sugar workers. He knew that, that was a blatant untruth and that the prime minister’s salary is just marginally above his $1,600,000 non-taxable, monthly pension. But I am sure that he holds a mistaken view that the bigger the lie, it is more likely that it could be believed.

STALINIST BEAST
For many years under one-party rule, I had grappled with that Goebbelian factor, and I had even fought within the post-Jagan PPP the Stalinist beast of contrived, controlled and contaminated inner-party propaganda. With the disappearance of moral leadership, lie-peddling had become a method of internal political struggle.

For example, the ground for the expulsion from the PPP of Khemraj Ramjattan was laid when he was accused of being an “American spy.” Earlier, I was pushed to the edge of disillusionment after the Stalinists peddled a lie that I had planned to succeed Dr. Jagan as party leader/president and, two years later, that I had rigged the 1998 Congress vote to emerge at the top of the list of elected party leaders.

I not only survived those conspiracies, but became more empowered to pass judgment against the real riggers!
But the Big Lie has now crawled into the national political arena. Some members of the opposition would repeat that $100 million was spent on renovating the prime minister’s residence; another $100 million was spent on buying for him a custom-built SUV, etc. They have been fed on the fascist-like propaganda brew that a lie repeated often, is likely to be accepted as the truth.

The shouts of “rape”, “rape” by opposition MPs inside the Chamber of Parliament elevated the Big Lie to the status of theatre. That sordid incident was also a graphic and dramatic lesson of how the Big Lie, like a “feral blast”, could be deployed against perceived opponents, and even to besmirch the character of law-enforcement officers.

FIDDLING WITH TRUTH
When the Big Lie is hard to tell, there is resort to fiddling with the truth. Take a look at the attempts to hide the huge debt that Guysuco racked up, that exposed how the sugar industry was bankrupted under the Jagdeo regime.

The documentary evidence shows that at one point the debt had reached $82 billion, but it has since been reduced. The opposition had tried to walk around the debt, treating it as a paper baggage that government could easily take over and absorb.

It cannot be that Guyana would be forever condemned to a culture of political deception and lies. We owe it to the future generation to counter the litany of lies and not allow it, like a Shakespearian tragedy, to consume us all. 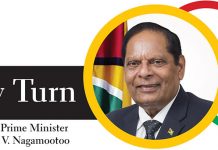