But do our people know why?

Take for instance, the news that a fifth oil find has been made offshore Guyana. Has that discovery filtered to our hinterland population? Do they know that the latest find in the Turbot well, complements positive, potential yields of billions of barrels of oil in other wells such as Liza, Payara and Snoek?

The oil discoveries by ExxonMobil and other oil producing partners have become the buzz-topic elsewhere in the world which is why our Guyanese people ought to be better informed.

RADIO MAHDIA
This is the context that explains what is happening today, in the township of Mahdia. Today, for the first time, Radio Mahdia will come on air. Through Radio Mahdia, information will reach people living and working in the heart of Guyana.
For those who are not familiar with the area, Mahdia is located in Region Eight (Potaro-Siparuni), and lies at the centre of gold and diamond mining. Region Eight is bigger than Jamaica, Trinidad, Barbados, Grenada and Dominica, combined.

Yet, this region has been without a dedicated radio service, until now. Radio Mahdia 95.1 will reach residents not only in the greater township but satellite areas such as Campbell Town, Micobie, Muruwa and El Paso. Between 75 and 100 mining camps would now hear radio Mahdia.

For many years I have explored the possibility of extending both television and radio signals from the flag-ship state station in Georgetown, to our hinterland regions. This had become important to boost communication to our people, who live in border areas over which spurious claims have been raised.

Radio Paiwomak was introduced as a unique station, relaying programmes from the state network and breaking off for local content, sometimes in an indigenous language. There is also the television Learning Channel, which relays children’s programmes to some 16 locations.

PURPOSEFUL NETWORK
But communication to hinterland communities required a purposeful network which resulted in the commissioning of Radio Lethem and Radio Mabaruma, as regional extension services. Shortly, and during this year, we will establish Radio Bartica, Radio Aishalton and Radio Orealla.

Better times are indeed ahead, since it is our intention to include all regions in our national public communication grid. The intention is not only to spread information and education but to stimulate feedback as well as use, promote and preserve our indigenous languages.
The hinterland regional radio outreaches have become very popular.

Lethem is now referred to as “Radioland”. One mother called to say that Radio Lethem has changed her life. Instead of tuning into Brazilian stations, she is happy to listen to English Language features, and to learn what is happening inside Guyana.
Folks are now asking why did it take so long to get these regional radio stations going?

FRIENDS AND FAMILIES
You hear people commenting cynically, that the last administration was too busy handing out radio and television frequencies to their family and friends, and that they took no heed to the needs of our people in hinterland communities. Their cronies in Friends & Families Inc. only wanted to do business in heavily populated areas, which has prospects of lucrative audience, and consequential big revenue returns.

That abuse is now being curtailed since all licences would be allocated in different geographic zones with incentive by way of lower fees for licences to operate in rural and hinterland areas.

Our people need to know that better days are ahead, They must know of the efforts by Guyana to slowly and painfully claw her way out from the discredited past. It was a past when economic life was mired in incestuous dealings with the drugs cartel, contraband trade, money laundering and the theft of public assets.

They must know that economic growth has slowed down, but not come to a standstill, due to the cumulative policy deficits and unproductive investment profiles, such as the Skeldon factory, Marriott Hotel/Casino, Amaila road/hydro, etc..

BOUNCING BACK
The economy remains shaken and vulnerable. But the good news is that sections are bouncing back, such as gold and rice production. While the price for padi is not where farmers would be comfortable, they do not now suffer from unavailability of markets. A new destination is Mexico, and already some 70,000 tons of padi have been shipped. Cuba also has re-opened her market to Guyana’s rice, and the first shipment is on its way to Havana.

Last week, for example, during a tour of the DDL complex, Minister Gaskin and I were told that this local liquor and juice company is investing $10 billion over the next three years in business expansion. This investment plan includes boosting processing facilities in order to buy from farmers greater supplies of local fruits for juice production.

The resurgence of business confidence will not come overnight but the state has a responsibility to tell its story, and the expansion of its radio network to reach hinterland communities is heading in the right direction. 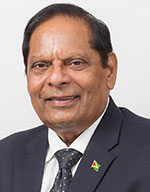